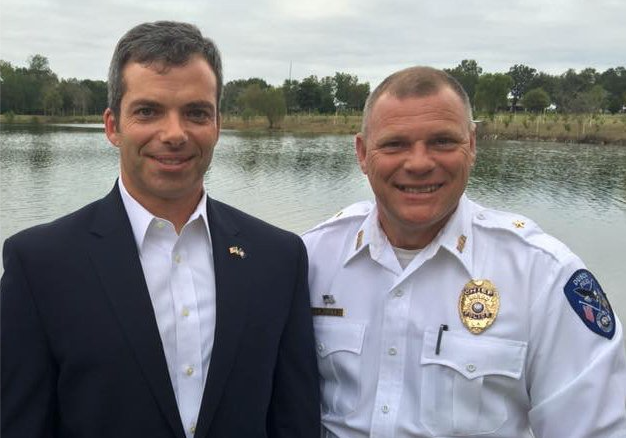 Posted at 07:21h in Lafayette City Marshal by admin

Judice took over as Duson Police chief in May 2015 after retiring from the Lafayette Parish Sheriff’s Office following a 30-year career. Judice took a brief leave of absence from the department in 2014 to run for city marshal, a bid he lost to Pope.

Pope was suspended from the city marshal’s office in October 2018 after he was convicted on three malfeasance in office charges.

C. Michael Hill, a retired federal magistrate and civil litigation mediator, was sworn in as interim city marshal to maintain order while Pope’s appeal works through the courts. Judice credited Hill with restoring order to the office and said he plans to build on that success.

Judice announced his candidacy before a crowd of a couple hundred supporters in the newly opened Table Room venue space in the Cajundome. Television screens flashed with articles highlighting arrests and department successes under Judice’s leadership while volunteers handed out “Judice” stickers.

“Like me, this building is older. It’s rugged and stood the test of time, but it’s prepared for more. New challenges. This room is fresh and full of new technological capabilities,” he said. “I’m ready to start a new progressive way of doing business at the marshal’s office but have stood the test of time with 35 years as a law man.”

Lafayette Parish Sheriff Mark Garber introduced Judice and threw his support behind his candidacy. While the two men didn’t overlap at the sheriff’s office, Garber said Judice’s reputation preceded him and he’s witnessed his professionalism and ability to communicate and build relationships while working together in the law enforcement community.

“I’m proud to say I’m going to support my friend and my colleague,” Garber said.

Judice said he wasn’t bitter about the 2014 outcome. The people made their choice; this time he’s simply hoping they choose differently, he said.

“I was ready to lead the Lafayette City Marshal’s Office in 2014, and fell a little short, but in the five years since that election I have learned even more about leadership, more about management of a police agency and I know that I am prepared for the challenges,” Judice said in a statement. “I am that guy who will bring stability, integrity and transparency back to the Office of the Lafayette City Marshal.”

Judice said he thinks his record of success in Duson will help persuade voters he’s the right person to reestablish order at the city marshal’s office. When Judice took office in 2015, the Duson Police Department had a backlog of felony arrests awaiting submission to the 15th Judicial District Attorney’s office, a stockpile of unlabeled evidence and two full-time employees.

The department now has eight full-time officers, an over $650,000 operating budget and new squad vehicles thanks to funding from traffic fines, he said. Leading a culture change was key to the improvements; Judice said he focused on hiring qualified officers, training them well and ensuring they were properly supplied to execute their duties.

If elected Lafayette’s next city marshal, Judice said his goals include depoliticizing the office, restoring transparency and respect, and implementing technology upgrades. He said he’s interested in exploring e-Serve programs to electronically serve some offenders and text messaging or email reminder systems to remind people of court dates.

Judice said the switch would reduce fuel costs, vehicle repair costs and save man hours that could be devoted to other work. It would also hopefully reduce the number of warrants issued for defendants’ failure to appear in court, while increasing marshals’ safety, he said.

“I think the marshal’s office has slipped by not keeping up with today’s technology. They do what they do because it’s the way it’s always been done. That’s not thinking 10 to 15 years down the line and seeing how we can move forward,” he said.

While different from his focus at the Duson Police Department, Judice said every task is accomplishable with professional police management, efficient resource use and honed focus. He said if one of his proposed initiatives isn’t possible in the beginning, he’ll assess available options and determine what progress can be made.

“It’s no different than having a dysfunctional evidence room. If you bring in good professional police management, you can achieve that goal,” he said.

Judice lost the last election by 1,634 votes, landing about 48% of the vote compared to Pope’s 52%. He said during this campaign the biggest change he plans to make at the outset is getting more involved in social media. Judice said he wants to connect with voters and is considering doing a series of videos introducing himself and his success at the Duson Police Department.